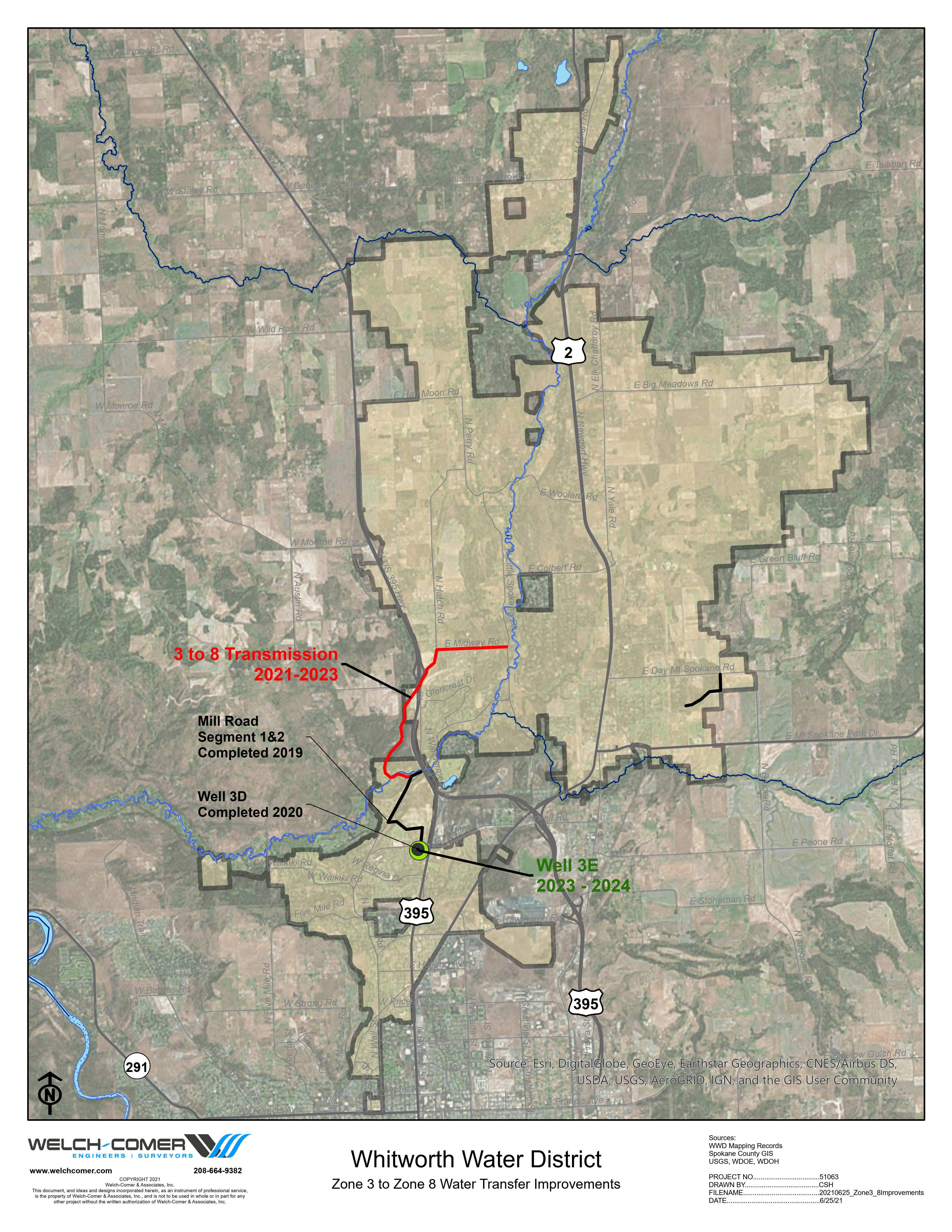 Whitworth Water District (District) is the largest water purveyor within unincorporated Spokane County. The District provides water service to approximately 11,000 connections accounting for approximately 35,000 residents. The District’s current retail service area is highlighted in tan on the above map.

The District’s Little Spokane River Water Supply Resiliency Project (Project) encompasses two new high production wells (one of which is already constructed), and four and a half miles of 24” pipeline. The Project is anticipated to $14 million dollars.

The Project will effectively bridge the infrastructure and water supply gap between two groundwater sources: the Spokane Valley Rathdrum Prairie aquifer (SVRP); and the Little Spokane River aquifer (LSR). The SVRP is considered by many to be one of the most prolific aquifers in the world, while withdrawals from the LSR more directly, and negatively, impact stream flows of the Little Spokane river leading to increased water rights issues and the potential for adverse ecological impacts.

During the District’s Water System Planning process in 2018, it was determined that additional District source capacity was required to support future growth within the LSR. The most cost effective and timely approach would have been for the District to construct additional wells in the Little Spokane river aquifer. Given the Hirst decision and resulting RCW 90.94, the District decided to play a leadership role and avoid further increasing Little Spokane river aquifer deficits in an already taxed and fragile watershed system.

Instead of increasing impacts to the LSR, the District developed a plan to drill a series of wells and transport that supply through new transmission lines from the SVRP up to the service area of the LSR. To date, the District has invested over $7.3 million toward these improvements (see map above), which have included:

Benefits to Spokane County and the LSR:

This project is in direct alignment with Spokane County’s Comprehensive Plan – Capital Facilities and Utilities Goals and Policies.

A large portion of the Little Spokane River aquifer area within Spokane County is located within the boundary of the District’s retail or future service areas. RCW 90.94 does not require water offsets nor monitoring by Spokane County so long as new development is connected to a municipal water purveyor. As a means to provide necessary long-term water supply to the LSR, it is critical that the District’s Little Spokane River Water Supply Resiliency Project is completed.

While this project focuses on the ability to transfer water from the more abundant SVRP to the LSR, there is a residual benefit of this project to system resiliency. That is, the construction of the large diameter transmission main between the two aquifers also allows the District the ability to move water from LSR to SVRP in the event of a contamination event that impacts the District’s sources within the SVRP.

Phase II of the Little Spokane River Water Supply Resiliency Project requires an additional 3.4 miles of 24” transmission main from the vicinity of Dartford Road and Mill Road to Midway Road (where Phase I left off).

The last components of the Project, a high production well (Well 3E) will provide the District an additional 4300 gallons per minute of source capacity from the SVRP to the LSR to support future demands.

The District estimates that the 24” Main Phase II will cost $7.5 million to construct. In 2021, the District was awarded two low interest loans to complete the 24” Main Phase II. These loans included $5.0 million from the Washington State Department of Health’s Drinking Water State Revolving Loan Fund (DWSRF) and $1.56 million loan from the Public Works Board. The District is also actively seeking $4 million in American Recovery Plan Act grant funding through Spokane County to accomplish Phase II.